I recently picked up this portable projector for a reasonable price. It might also be called a "M5" projector, but I can not find one canonical source. In terms of projection, it performs as well as a 5cm cube could be expected to. They made a poor choice to eschew adding an external video input which severely limits the device's usefulness.

The design is nice and getting into it is quite an effort. There is no wasted space! After pulling off the rubber top covering and base, you have to pry the decorative metal shielding off all sides to access the screws to open it. This almost unavoidably bends it so it will never quite be the same. To avoid you having to bother, some photos: 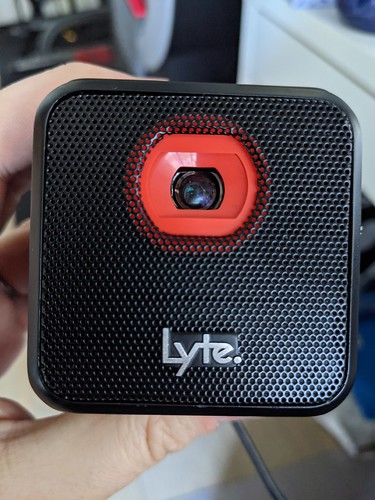 It is fairly locked down. I found a couple of ways in; installing the Disney+ app from the "Aptoide TV" store it ships with does not work, but the app prompts you to update it, which sends you to an action where you can then choose to open the Google Play store. From there, you can install things that work on it's Android 7 OS. This allowed me to install a system-viewer app which revealed its specs:

Another weird thing I found was that if you go into the custom launcher "About" page under settings and keep clicking the "OK" button on the version number, it will open the standard Android settings page. From there you can enable developer options. I could not get it connecting to ADB, although you perhaps need a USB OTG cable which I didn't have.

It has some sort of built-in Miracast app that I could not get anything to detect. It doesn't have the native Google app store; most of the apps in the provided system don't work. Somehow it runs Netflix via a webview or which is hard to use.

If it had HDMI input it would still be a useful little thing to plug things into. You could perhaps sideload some sort of apps to get the screensharing working, or it plays media files off a USB stick or network shares. I don't believe there is any practical way to get a more recent Android on this, leaving it on an accelerated path to e-waste for all but the most boutique users.