Tip: if you would like your own cow sticker, take a cute child through the checkouts at your local Whole Foods.

From RFC3164, which is otherwise about syslog formats:

An odor may be considered to be a message that does not require any acknowledgement. People tend to avoid bad odors but are drawn to odors that they associate with good food. The acknowledgement of the receipt of the odor or scent is not required and indeed it may be the height of discretion to totally ignore some odors. On the other hand, it is usually considered good civility to acknowledge the prowess of the cook merely from the ambiance wafting from the kitchen. Similarly, various species have been found to utilize odors to attract mates. One species of moth uses this scent to find each other. However, it has been found that bolas spiders can mimic the odor of the female moths of this species. This scent will then attract male moths, which will follow it with the expectation of finding a mate. Instead, when they arrive at the source of the scent, they will be eaten [8]. This is a case of a false message being sent out with inimical intent.

Along the lines of the analogy, computer event messages may be sent accidentally, erroneously and even maliciously.

This smells more like "I bet nobody ever really reads this RFC, let's put some stuff in the middle to see if they do!".

I was recently driving through the California desert and came across the Salton Sea. Long story short - it rained a lot and the Colorado River overflowed a bunch of dams and dikes meant to contain it and created a huge inland sea. Oops.

Some enterprising souls must have decided that despite the lack of any natural flushing dooming the sea to a salty, polluted existence, there was ripe opportunity to create a sea-side metropolis.

From the ground, it is a bit of a fun ghost town to explore. The typical "everything just abandoned" type thing. But when I came to geotag some photos I took there, I was quite astonished to see this.

That looks exactly like what I used to do in SimCity. I'd use the F-U-N-D-S cheat at the start to max out my money, then build my little empire with neat roads and school and harbours and whatnot — they've even got an airport! Then I'd press "go" and people would slowly move in to the residential areas, one house on one block at a time.

I guess poor old Salton City never made it past "turtle speed"!

My attempt at answering that most important of questions : where should one place their plate in the microwave to achieve maximal heating?

A common trick years ago was to set up your routing tables and then have PID 1 exit so the kernel paniced, because the paniced kernel would continue to route packets with _no_userspace_running_. Darn hard to hack a system like that.

This is such a ridiculously stupid idea I think it has wrapped all the way around to the point where it just grazes "genius"!

I was watching 24 the other day and (without giving anything away) Edgar Stiles had to "patch a system call" to save the world. After chiding his assistant for giving him the wrong opcode for a "load A, conditional" the following briefly appears on the screen. 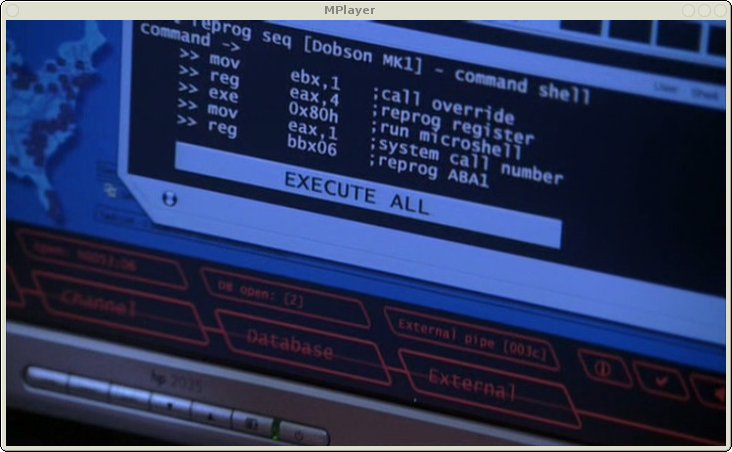 It's actually a pretty good piece of technobabble. The register names and use of 0x80 suggest whoever wrote this has at least some familiarity with x86 assembly. It would have been slightly better if they called the "microshell" a "microkernel" and put the system call in eax before calling the interrupt, but if you believe Jack's amazing ability to get cell phone reception then it's only a small issue!

What is it with the price of cables? Even leaving aside patently absurd enhancements such as gold plated optical connectors, who is buying all these ridiculously overpriced Monster cables?

Thus when purchasing a new cable today it was a pleasant surprise to find a cable company who are happy to state their business model prominently in their name: ConCord. The only thing that would have made it better was if their tag line was "we're screwing you for this cable, but at least we're telling you straight up". 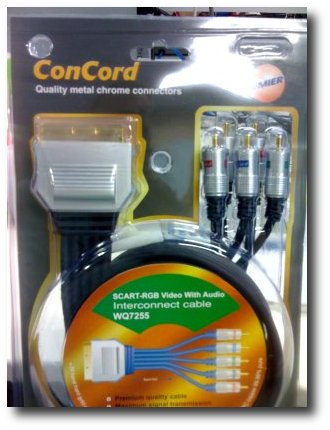 It reminded me of the apt rename of the UNSW student centre to the NewSouth Q, which I assume was done to more accurately describe its function as a gigantic queue (though they might as well have gone the whole way and called it the "NewSouth QForAnHourAndWellSayWeCantHelpYouAndYouNeedToStandInThisOtherQ").

On the bus yesterday I noticed a graffiti etching clearly left by someone employed by IBM. In fact the guy in the row in front had an IBM tee-shirt on, and I suspect he is the culprit, or possibly one of the OzLabs people.

If you're ever on Sydney Buses bus number 2660 it can probably still be seen on the driver side window on the back seat. Maybe what Itanium needs isn't higher clock speeds, lower power, faster FSB, etc., but a concerted tagging effort on public transport around the world!