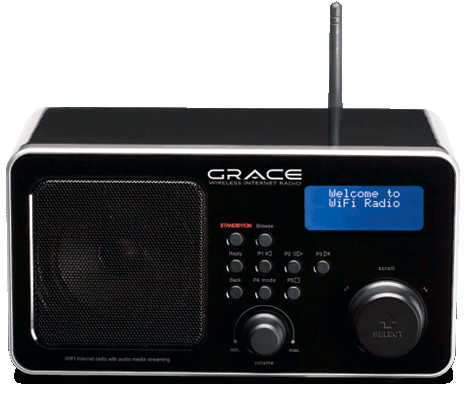 There seem to be a number of competing products available at the moment, and it seems they are all based on the Reciva internet radio platform. This appears to be an ARM based system running Linux (checkout the GPL compliance area).

It has built-in wireless, so connects up directly to your 802.11 network. It supports WEP and WPA; entering the WPA key is a little like entering your high score on an arcade game with a built-in scrolling alphabet. It supports all sorts of codecs, including the most important Real, WMA and MP3.

Once on the network, it contacts Reciva service (free) to update and download channel lists. Once there, you can select stations filtered by region (Europe, Oceania, etc) then country. There are literally thousands to choose from, and users can contribute streams which are filtered by Reciva and added to the database periodically. An excellent feature is the ability to log-in to the website and both build favourite lists and add your own personal streams. You then register your radio's serial number with the website and on the next channel update you get access to your lists.

It also offers you the opportunity to connect to a local PC to stream music from folders there; I haven't looked into this feature at all.

Overall, it's a great device. The audio quality is great, and it seems to have at least a little sub-woofer built in. It has some nice features; 5 of the buttons on the front are quick access preset buttons, just hold it down when you are listening to the station and it remembers it. It supports a wide range of streams, the interface is simple to understand, it keeps the clock via NTP and directly connecting to the wireless is great.

My ideal application is for a bedside clock radio, so I can listen to .au radio as I go to sleep and wake up. It has an inbuilt back-lit clock, sleep timer and alarm system, but they all take a bit of fiddling. The buttons are small and black, which doesn't help in the dark, and most access is done via the big scroll wheel which you press to make a selection (think iPod). However, the resistance of the rubber pads is less than that the pressure required to push the button in, so it really takes two hands. This means when you want to setup an alarm and put on the sleep timer as you go to bed there is a bit of fiddling through menus, etc. Also, as it is playing the clock seems to go away. Initially I had a problem with firewall ports, but it doesn't seem a big issue on the forums so it must have just been me.

I also wonder what happens when Reciva go out of business, because all the tuning happens via their website. Something similar happened when 3com Audrey support was dropped; it then became a matter of faking DNS replies. Sniffing the protocol might be fun :)

All in all, although it sounds a little silly, if you know what you want it for this is a great little system. I imagine any expat will get their money's worth listening to home radio stations. If you're only interested in local radio, I'd still suggest the best thing is still probably (surprise, surprise) a radio. It leaves a little to be desired as a bedside radio but is otherwise a very nice toy!

2009-02-20 This has turned out to be one of the more popular things I have ever posted, so I should provide an update. There have been several firmware updates released with a range of new features, the most notable being able to hook up to Pandora and Sirius.

Other than that, there have been some nice updates such as allowing the wireless to stay connected in the background, reducing the time between turning on and getting radio sounds out, and a few display updates like displaying the time while radio is playing.

I have played around a bit more with the local media streaming; I found it quite unintuitive and difficult to use. I set up my entire MP3 collection as a Samaba share and pointed the radio at it, but it choked scanning the directory and the few thousand files. I found the only practical way was to setup a separate share with just a few things in it and create a .m3u playlist. Trying to navigate through many songs on the little screen just isn't great.