I think there is room for one more explanation on the internet, since I've never seen it diagrammed out (maybe for good reason!). 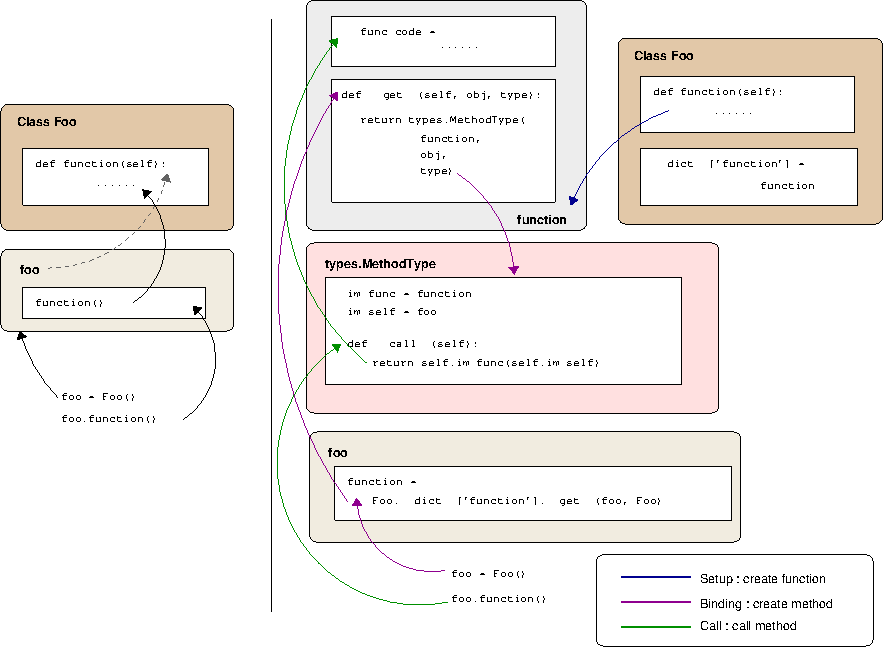 In the above diagram on the left, we have the fairly simple conceptual model of a class with a function. One naturally tends to think of the function as a part of the class and your instance calls into that function. This is conceptually correct, but a little abstracted from what's actually happening.

The right attempts to illustrate the underlying process in some more depth. The first step, on the top right, is building something like the following:

As this illustrates, the above code results in two things happening; firstly a function object for function is created and secondly the __dict__ attribute of the class is given a key function that points to this function object.

Now the thing about this function object is that it implements the descriptor protocol. In short, if an object implements a __get__ function; then when that object is accessed as an attribute of an object the __get__ function is called. You can read up on the descriptor protocol, but the important part to remember is that it passes in the context from which it is called; that is the object that is calling the function.

So, for example, when we then do the following:

what happens is that we get the attribute function of f and then call it. f above doesn't actually know anything about function as such — what it does know is its class inheritance and so Python goes searching the parent's class __dict__ to try and find the function attribute. It finds this, and as per the descriptor protocol when the attribute is accessed it calls the __get__ function of the underlying function object.

So when you print the value of f.function() you see it report itself as a bound method. So hopefully this illustrates that a bound method is a just a special object that knows how to call an underlying function with context about the object that's calling it.

To try and make this a little more concrete, consider the following program:

So the main point is to kind of shift thinking about a function as some particular intrinsic part of a class, but rather as a separate object abstracted from the class that gets bound into an instance as required. The class is in some ways a template and namespacing tool to allow you to find the right function objects; it doesn't actually implement the functions as such.

There is plenty more information if you search for "descriptor protocol" and Python binding rules and lots of advanced tricks you can play. But hopefully this is a useful introduction to get an initial handle on what's going on!