You may have noticed a range of things mounted on a tmpfs file system.

tmpfs is actually more pervasive than it might appear. It was created to build a filesystem interface ontop of shared pages of RAM. This is useful because there are a number of ways to access shared RAM; notably SysV IPC Shared Memory (shmget, shmat, etc) and mmap of anonymous memory (MAP_ANONYMOUS).

In order to have a consistent infrastructure implementing all of this the kernel abstracts RAM as a filesystem and your mapping as a file. To this end the tmpfs filesystem was created to present this abstraction. It deals with issues such as caching, security and the ability to swap pages in a consistent manner (i.e. using the same infrastructure every other file system does). 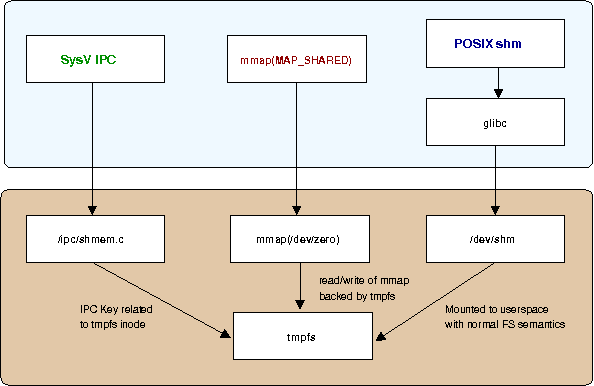 Overall, tmpfs is implemented in mm/shmem.c. In the initialisation function the file system is mounted internally by the kernel with vfs_kern_mount so it is always around. It gets fairly complicated because it has to keep track of swapped out pages and the general complexity that come with implementing a full filesystem.

As described above, there are several distinct ways to get access to this file system.

tmpfs: more than meets the eye!

Update: hopefully a little clearer, thanks to Helge Bahmann for comments.