Dick Smith are selling the Brother HL-2040 laser printer for what seems like a very cheap price of $89. It even says on the box it comes with a toner good for 2500 pages, so it doesn't seem to be the usual trick of a cartridge just full enough to print a test page before requiring an expensive purchase.

I fully expected to have to learn how CUPS worked, since previously I'd only ever printed to already setup printers. However, all I had to do was install the Debian packages for the LPR and CUPS drivers from the support page and plug it in (via USB) and, somehow, it magically worked. Big marks for shipping working packages for a range of distributions.

However, a big negative is that the LPR bit is proprietary. Unsurprising, since I assume the printer has almost no in-bulit logic, but disappointing none the less. Thus you of course can't use it on anything but your standard 32bit x86, which probably sucks if you want to hook it up to a printer sharing box or something (of course CUPS can network share it). And although it works now, there is always the chance it will break horribly in the future.

I think it is fairly low resolution compared with more expensive models, but it looks fine to me. The only annoyance is that the paper comes out extremely curled. This has a number of disadvantages; firstly your output doesn't sit right, secondly you need to keep a careful eye on the output tray because eventually pages will go everywhere and thirdly, I would be very worried about running it back through a second time to print on the back, since it looks like it would jam it up easily.

For someone on a budget who occasionally prints out a few things from their x86 Linux box, this printer is fine. If you were using it on a daily basis I think it would get very annoying, and I'd probably look for a more expensive model that doesn't curl the pages as much and has less chance of breaking in the future due to software bit-rot. Also, don't forget that printers don't come with a cable. I would highly recommend one such as pictured below, which as you can see has the "Proprietary look and feel of unsurpassed quality"! I've enjoyed Ars Technica for a long time, even from the pre-history before RSS when you had to remember what sites you liked to visit. Having an interest in computer architecture, I thus grabbed (a signed copy of) Jon Stokes' Inside the Machine quickly when it came out.

Having learnt what I know about architecture the "traditional" way (e.g. textbooks and courses) I was interested in the "beginners guide" approach. The early parts of the book, explaining the basics of microprocessors, rely quite heavily on analogies (the "file clerk", the "document storage room", the "SUV factory" etc). Personally, I'm not sure how much this aids the understanding of the material — for mine the length of time spent describing the analogies gets in the way of the material. I understand, however, that I am not the target market for the early part of the book. The introduction to instruction encoding with the "DLW" architecture serves as a good illustration; it is the type of stuff I think should be in every introductory CS course. The diagrams throughout are very clear, and it really lives up to its billing as an "illustrated guide".

For mine, what is most impressive is the later chapters, which are an unrivalled review of x86 and PowerPC architecture. They are clearly well researched, and step you through the architecture and its history logically and clearly. The level of detail is perfect, giving you more than enough depth to understand what is happening but not bothering to delve into irrelevant esoteric implementation details which would simply make the book fatter (c.f. H&P). If you've studied architecture before you can skip to Chapter 5 and dive into this bit straight away.

If you have more than a passing interest, I still think investing in a copy of Hennessy and Patterson and plowing through the first few chapters (and appendixes) is an unrivalled introduction. But this book is about 1/3rd as thick, much easier reading and, more importantly, is the only current compendium on modern (i.e. still in production/development) architectures. I shudder to think how long was spent pouring over architecture manuals, whitepapers and old HOTCHIPS papers to distill the useful information it contains. Computer architecture is a fascinating art, and this book may well be the best passport to the otherwise inaccessible city of transistors just below your fingertips.

I received for Christmas a cool little LCD scrolling panel. Of course the first thing I did was sniff the crappy Windows control program to figure out how to program it.

It doesn't have a particular brand name that I can see, but it comes up as a Prolific USB to Serial converter when plugged in. It looks like the photos below.

The protocol to program it, if you could call it that, consists of sending at 9600 baud, N81, a leading byte 0xAA followed by a one byte number between 1 and 5 for the scroll speed, your message of up to 73 characters (more makes it crash) and a trailing byte of 0xCC.

I have written lcd-scroller program to control it. QA seems to be pretty poor on this thing; send too many characters and it locks up or resets, and occasionally it shows PLEASE WRITE AGAIN! for no apparent reason. However, it's still fun to stream an RSS feed of the cricket scores or similar!

I just came across an article on Salon lamenting the death of BASIC called "Why Johnny can't code". It reminded me of the the following photo, which clearly shows why I can code. 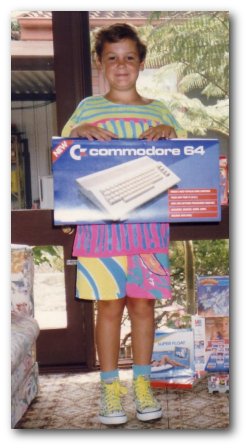 I don't know the exact date, but the fluro shoelaces gives a pretty good time-frame. Thanks to my Dad for firstly buying the Commodore 64, and then scanning in a bunch of old photos 15 years later!

The Philips DVDR77 is a DVD+RW recorder with an inbuilt PCMICA media reader, which due to apparent obsolence can be found quite cheap. To make it region free the easiest way is to use a Palm Pilot

There is also a firmware upgrade (direct link).

morrison, my old AlphaPC 164 has finally had it's last shutdown -h. Rescued on a mercy mission to Canberra it has served me well for many years. Sure, it had it's quirks; the ATX power supply modified with a paper clip, no off switch, noise and heat to rival a coal mine and an infuriating ability to not detect a keyboard and thus default to the serial port, rather than the VGA card (that one had me going for hours).

Ultimately it's 266MHz Alpha has been replaced by a processor almost 10 times its clock speed and half its word size, but not appreciably faster handling the mail and file serving tasks it did so well. It's tough to survive in a world when you can be replaced by a processor, all-in-one motherboard and RAM for just over $200.

Now I have to double check all the security alerts to make sure I'm not vulnerable to the latest stupid buffer overflow. But I do have a nice big RAID5 array to hold MP3's.

If anyone is interested in a slightly used Alpha with a few extras it could be exchanged for some form of alcohol.

Especially when that toy comes from SGI

New Altix 350, $lots. Shipping it to UNSW, $lots. Watching them play with the box ... priceless

Hopefully we can get this to boot so we can be super-cool like everyone else :)

I've recently got great service from two companies online, so credit where credit is due.